← Small Business Saturday: SMEs urged to tap into Birmingham’s £3m fund
True grit: Thank you to everyone who kept Birmingham moving in the snow →

Birmingham and Solihull chosen as sport and activity trailblazers

Birmingham and Solihull has been chosen by Sport England as a pilot area to work with on a bold new approach to build healthier, more active communities across England. 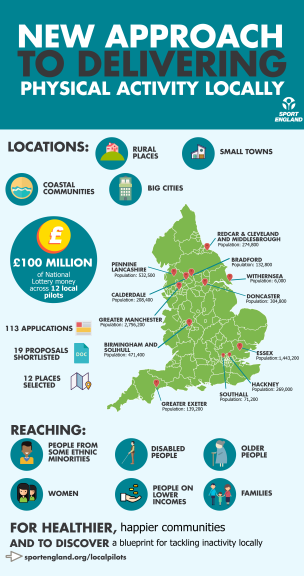 Around £100million of National Lottery funding will be invested in 12 pilot schemes over four years, to create innovative partnerships that make it easier for people in these communities to access sport and physical activity.

Latest research shows that a quarter of the general population (11.5 million people) are inactive, meaning they do less than 30 minutes of exercise that gets them slightly out of breath each week, with certain groups such as those in lower paid jobs, women and the disabled disproportionately affected.

By focusing intensely in 12 areas, Sport England and the local partners want to identify better ways to address these stubborn inequalities and break down the barriers that stop people getting active, such as poor transport, safety, cost and confidence.

It wants to encourage wider, collaborative partnerships which look at how all parts of a community can better work together to help the most inactive – from the transport links and street lighting to the quality of parks and open spaces, to how sport and activity is promoted by GPs.

Leader of Birmingham City Council Cllr Ian Ward said: “This is about so much more than sport. In addition to improving physical wellbeing, being active can boost mental health, combat isolation, help people stay independent into later life and bring communities together.

“We know from successful initiatives like Active Parks, This Girl Can, Run Birmingham and Big Birmingham Bikes that removing barriers like cost can make a huge difference to participation and encourage people who would otherwise remain inactive to get involved.

“Now thanks to Sport England and the National Lottery we can work with our partners in Solihull to build on previous successes and help more people than ever lead physically and civically active lives.”

Councillor Bob Sleigh OBE, Leader of Solihull Council, said: “We are thrilled that we have been chosen by Sport England to deliver new physical activity programmes within the borough.

“We know that some people within Solihull carry out less physical activity than others, so we’re really keen to target these individuals and encourage them to get more active within their community.

“This is a long term project and brings exciting times ahead. We’re looking forward to working with Sport England and our colleagues at Birmingham City Council to create better access to sport and improve the health and wellbeing of our local residents.”

Minister for Sport Tracey Crouch said: “Sport is a powerful tool that helps strengthen communities and improves physical and mental health. So it is right that we look to do all we can to encourage people to take part. Sport England will invest up to £100 million of funding, thanks to National Lottery players, to pilot innovative projects in 12 places to get more people from all backgrounds involved in sport and physical activity. We will look to replicate and scale up learning from the pilots across the country. I look forward to seeing these projects in action.”

Jennie Price, Sport England Chief Executive said: “We are delighted that Birmingham and Solihull will be working with us on this ground-breaking investment. We want to get to the heart of the issues that stop people being as active as they might like to be, and work alongside every part of the community and the groups and institutions in Birmingham and Solihull that support them.

“This is not all about sport – we’re prepared to look at wider issues like transport, childcare, how easy it is to walk or cycle – whatever that community feels is most relevant to them. The process to be appointed as a pilot area for this work was incredibly competitive, and Birmingham and Solihull have emerged from a very strong field. I am really delighted to be working with them.”

The Birmingham and Solihull Pilot

Based on evidence and data from the Birmingham and Solihull Active Data Teams six areas were identified as follows:

Four thematic communities are to be targeted in these areas – they are:

In both Stage 1 and 2 we identified four outcomes which we believe reflect the step changes required to bring about a difference, they are as follows:

Through activity, co-creation and facilitation, citizens will have a sense of place and belonging, participation and engagement, resulting in invigorated, strong and resilient communities.

Sport England and our stakeholders have clearer insight into the impact and effectiveness of a whole system approach to tackling inactivity with citizens, community and place, through integrated data collection and analysis of past, current and future programmes.

Through vision, leadership and collaboration, Birmingham and Solihull have an effective, dynamic and responsive, whole systems approach to sport and physical activity, integrating with strategic policy decisions; the physical environment; organisations; institutions; citizens, communities and place.

About the Local Pilots

Sport England is trialling bold new approach to build healthier, more active communities across England. By investing up to £100m in 12 pilot areas, fostering innovative partnerships and focusing on those furthest from being active, it wants to learn how to make it easier for people in places everywhere to benefit from sport and physical activity.

Posted on December 5, 2017, in News. Bookmark the permalink. Leave a comment.

← Small Business Saturday: SMEs urged to tap into Birmingham’s £3m fund
True grit: Thank you to everyone who kept Birmingham moving in the snow →