New transport system will be sprinting for success at Commonwealth Games

Top athletes are not the only ones aiming to be in peak condition for the 2022 Commonwealth Games in Birmingham – the region’s transport system is also looking to be fast out the blocks.

Details were unveiled today (Thursday August 23) of a new type of transport called Sprint which will use tram-style vehicles to provide fast, reliable journeys along some of the region’s busiest roads.

Sprint, which runs on road-going wheels rather than tracks, will have seven routes by 2026 but three of those are now being accelerated so they are in place for the Games. 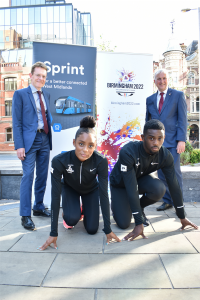 Mayor of the West Midlands Andy Street and Cllr Ian Ward, leader of Birmingham City Council, were joined by Great Britain sprinters Kaie Chambers-Brown (U20) and Cassie-Anne Pemberton (U18) in urging people to have their say and take part in a public consultation on the Sprint plans.

The Mayor said: “Sprint will work in tandem with the new suburban rail lines and Metro tram routes we are building, creating a transport network that can grow our economy, give people cleaner air and squeeze the maximum benefit possible from HS2.

“But Sprint can also help make the Games a success which is why we are accelerating three of the routes. I would urge people to have their say on these plans and help showcase our region to the world and shape our future transport system.”

Sprint is being developed by Transport for West Midlands (TfWM), which is part of the West Midlands Combined Authority (WMCA), in partnership with local councils including Birmingham, Sandwell, Solihull and Walsall.

The authorities have now drawn up detailed proposals for the three priority routes which are:

Cllr Ward, who is also WMCA portfolio holder for economic growth, said: “The arrival of Sprint will undoubtedly act as a catalyst for regeneration and inclusive growth in the West Midlands, offering improved access to jobs and opportunities including those provided by HS2, Birmingham’s Big City Plan, and other major employers in the region.

“Sprint will offer an attractive, viable alternative for car drivers and, as we continue to tackle the pressing issue of air pollution, this exciting project will help to significantly reduce the number of cars on our roads, improving air quality in our region.”

It will provide fast and dependable journey times using limited stops – around 500m apart – using its own dedicated lane through areas of high congestion. It will also get automatic priority at busy junctions.

Cllr Roger Lawrence, leader of City of Wolverhampton Council and WMCA portfolio holder for transport, said: “In many ways the Sprint vehicles look and feel like a tram especially in the way the seats are orientated and the doors operate.

“It combines the capacity of a tram system but with the flexibility, lower cost and simplicity of a bus. It is a proven concept in other European cities and we believe it can play a key role in our plans for the Commonwealth Games and the integrated transport system we are building for the future.”

Details of the plans, which would require some changes to road lanes, junctions, roadside parking and access, will also be available at five public events:

The consultation runs until September 28 and people can take part by visiting www.tfwm.org.uk/sprint 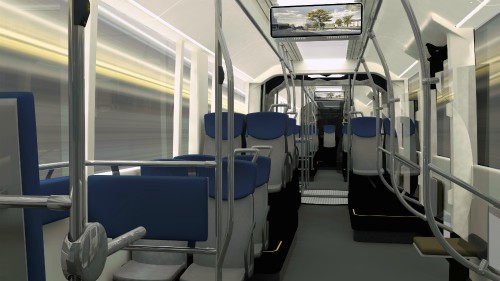 Making Birmingham a Donor City: I’ve signed-up to the Organ Donor Register – have you?

As the British Transplant Games drew to a close on Sunday, Birmingham was named Transplant Sport’s first ever Donor City. The award (in association with the Daily Mirror) recognises the city’s commitment to increasing the number of Birmingham citizens signed-up to the Organ Donor Register.

Council leader Ian Ward explains why he has registered to be a donor and urges other Birmingham citizens to do the same.

When I was asked earlier this year how hosting the British Transplant Games might be used to improve donor registration rates in the city, I suggested that Birmingham might become a Donor City.

And I’m delighted that – what seemed to me at the time to be a simple suggestion – has now brought together colleagues and partners from the NHS, Public Health and Birmingham City Council.

Now, our challenge is to use this award as a springboard to increasing awareness of the need for more donors and ultimately to bringing about a step-change in donor registration in Birmingham.

Our ambition is to make Birmingham the highest organ donor city in the UK; and the sad fact is that there is plenty of room for improvement.

According to NHS statistics released earlier this year, people in the West Midlands are the least likely in the country to have signed up to the organ donor register. In fact, fewer than one in four people in the region have signed up and in Birmingham the figure falls to just 21 per cent – sadly we are the second ranked of all core cities.

Those figures are not good enough, and sadly the picture gets even worse when you look at our BAME communities, which is why this project will have a particular focus on encouraging citizens from BAME communities (around 40 per cent of our population) to register.

Birmingham is an incredibly diverse city, home to people who can trace their roots back to virtually every country in the world – but if you are black, Asian or from another minority ethnicity, you have a significantly lower chance of receiving an organ than white patents.

Wolverhampton MP Eleanor Smith, who led a review into the situation entitled ‘Ending the Silent Crisis’, summed-up the problem when she recently wrote: “If members of the BAME communities don’t make donations of blood, organs and stem cells, then people will die! This is a very real health crisis. Demand is high – disproportionally high. And supply is extremely low.”

To address the shortfall, we must establish donation as a normal act. People in every community must feel able to talk about donation, illness and death. These are not easy topics and I understand why people shy away from them.

But organ donation saves lives and is the only hope for many desperately ill people in this city and elsewhere. There are people across the city who are alive today thanks to organ donation. They are alive because grieving relatives – in their darkest moments – selflessly agreed to help families also facing the prospect of losing a loved one.

The selfless actions of those courageous families should not be underestimated. They are true heroes.

If Birmingham lives up to the title of Donor City we will be a city of heroes and we will deliver a legacy that will improve the lives of many people on organ donor waiting lists.

Earlier this week we learned that a new opt-out system for organ donation could be in place by 2020, which is potentially very good news. But we still have a challenge on our hands to make organ donation to default option for people in Birmingham.

So this will be a campaign for hearts and minds. We need to get to a place, where donors are admired and respected, and their altruism recognised.

And success – as is nearly always the case – will require a team effort.

I’ve signed up to the Organ Donor Register and I will encourage my fellow citizens to do the same, starting with my colleagues on the city council.

If enough of us step up, in every neighbourhood and every community across the city, then we will truly merit the title of Donor City.

To register to donate, go to: https://www.organdonation.nhs.uk/register-to-donate/

For more information about donation go to: https://www.organdonation.nhs.uk/about-donation/